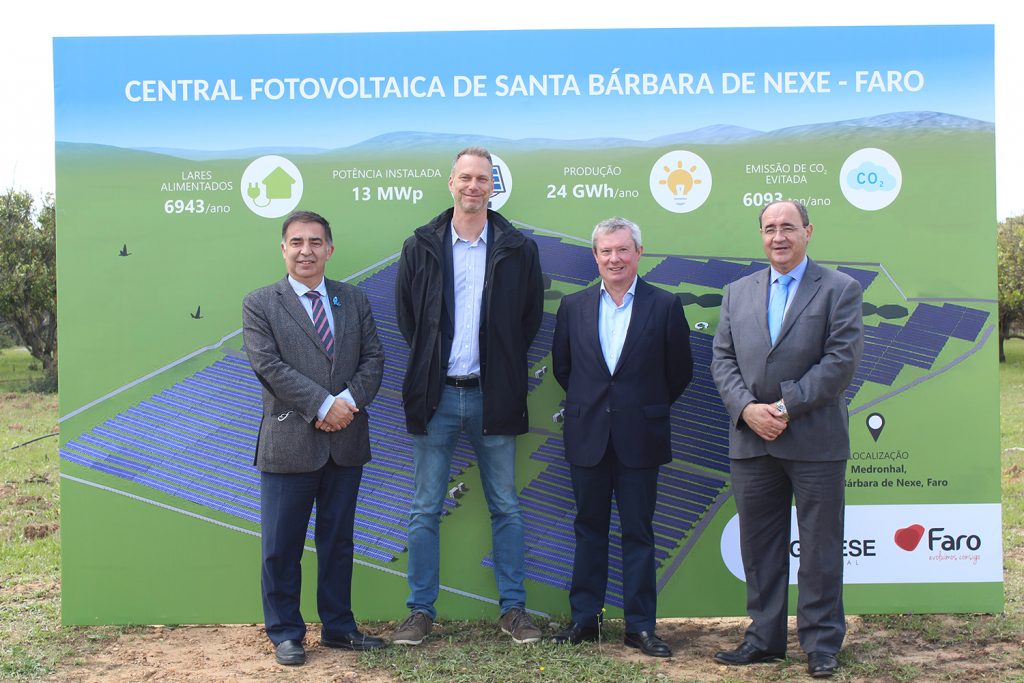 Génese Natural, a company operating in the field of renewable energy and sustainability, will invest 13 million euros in the construction and development of the Santa Bárbara de Nexe Photovoltaic Power plant in Faro, positioning itself as a producer of renewable electricity from solar. The project was presented today at the first stone launching event, on the terrain where the future power plant will be built. It was attended by the Mayor of Faro, Rogério Bacalhau, the representative of Génese Natural, Rogério da Ponte, and Director of Asunim, Andreas Schuenhoff.

The representative of Génese Natural, Rogério da Ponte, believes that the investment made in the Santa Bárbara de Nexe Photovoltaic Power Station is a very important step for the company, as it strengthens its presence in the Portuguese market. “This is one of several projects to produce renewable energy that we are developing in Portugal and will have a fundamental impact on the production of solar energy in the region of Faro, one of the best in terms of solar radiation in continental Europe. The construction of the new photovoltaic plant, which occupies a gross area of ​​​​about 24 hectares, is already underway and includes the installation of 13MWp, which corresponds to more than 24 thousand solar panels of 540Wp with bifacial cells, distributed over 14 hectares. Once connected to the grid, the photovoltaic park will have an annual production capacity of 24 GWh of electricity, which will allow it to supply 6,943 homes and avoid the emission of 6,093 tons of CO2 per year.

He continues that Génese Natural, in line with its environmental concerns, carefully manages to minimize the environmental impact that the Santa Bárbara de Nexe photovoltaic plant may have in the area in which it is located. In this sense, priority will be given to the preservation of a large protection area of up to 8ha, intended to maintain the existing biodiversity and the continuous natural corridors between the main areas of the photovoltaic park combined with permaculture vegetation management and zero pesticide use.

Andreas Schuenhoff, Director of asunim, which is also building, developing, and investing in several other national and foreign projects, argues that “Portugal has always had enormous potential in terms of solar energy production, not only due to its geographical characteristics, but also to the absence of national fossil resources”. He concludes: “Today there is increasing interest and investment in solar energy and sustainable development, which create value and local work. And we must reduce the import of fossil fuels and the country’s energy dependence, also countering climate change”.

The Mayor of Faro, Rogério Bacalhau, highlights: “The inauguration of this facility is of singular significance for the municipality of Faro, because it meets our policy of environmental sustainability and fits the objectives defined by this executive on renewable and environmentally friendly energy. In addition to being a sustainable and energy-intelligent solution, it is increasingly accessible and competitive, so it makes perfect sense to bet on the region of the country with the most hours of sunshine for the installation of a photovoltaic plant of this size and nature”. “It is with great satisfaction that I witness the maximization of a natural resource that belongs to everyone and that is placed at the service of all, without compromising future generations. Faro will always be available to host sustainable projects that allow us to grow without jeopardizing the environment and the well-being of our municipality and our citizens”, reiterates the mayor.

About Génese Natural: Founded in 2015, Génese Natural is a partnership between Cardinal Flexível and asunim, which aims to promote Renewable Energy and sustainability through the development of photovoltaic solar parks. Its mission is the production of electricity from a renewable source at the places of consumption, thus contributing to the reduction of the environmental impact of our way of life, improving its sustainability. asunim, an international reference in photovoltaic solar energy, maintains unique know-how and prestige in this sector.

This website uses cookies to improve your experience while you navigate through the website. Out of these, the cookies that are categorized as necessary are stored on your browser as they are essential for the working of basic functionalities of the website. We also use third-party cookies that help us analyze and understand how you use this website. These cookies will be stored in your browser only with your consent. You also have the option to opt-out of these cookies. But opting out of some of these cookies may affect your browsing experience.
Necessary Always Enabled
Necessary cookies are absolutely essential for the website to function properly. This category only includes cookies that ensures basic functionalities and security features of the website. These cookies do not store any personal information.
Non-necessary
Any cookies that may not be particularly necessary for the website to function and is used specifically to collect user personal data via analytics, ads, other embedded contents are termed as non-necessary cookies. It is mandatory to procure user consent prior to running these cookies on your website.
SAVE & ACCEPT